The beach guide has 13 beaches listed in and around the town of Penzance. 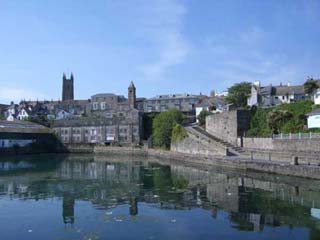 Penzance is the major town of the district of Penwith, or the Lands End Peninsula. Running from the harbour towards the fishing port of Newlyn, a mile to the west, is the only promenade in Cornwall. All roads lead to the harbour. The Isles of Scilly ferry - Scillonian III - sails regularly from here to the Islands throughout the summer. Chapel Street, the most historic area of the town contains many interesting houses, pubs, bars and restaurants. These include the famous Admiral Benbow, where Treasure Island begins, The Union Hotel, where the British victory at Trafalgar was announced and a host of quality restaurants. Penzance is reknowned for having a very mild climate. Palm trees can be found in the town's gardens and frost is a rarity. In late June there are festivals and traditional events including Golowan Festival and Mazey Day consisting of music and processions through Penzance's streets.